The weekend has finally arrived! Just a few short months ago this person I only knew as @karenlovestorun and I had cheered each other on through the Runner’s World Summer Run Streak and met up for a group run on a whim. Since then we’ve run together most weekends, signed up for our first marathon, and decided to add a “just for fun” race here in Philly.

This race, while I’m less nervous than any other race I’ve done, holds a lot of potential memories in it, and I’m excited.

– It’s my first race that I’m running as a training run. From here on out, mileage picks up for Disney, and I’ll be running further than I’ve ever run before.

– It’s my first race in my new hometown. I’ve been living in Philly for just over 2 months, and while I’ve run dozens of times here, this will be my first race. I am beyond excited to run with so many of my “neighbors”! This will went it look like for the first mile, I can’t wait! 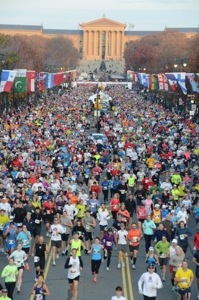 – For the first time since my first half in Pittsburgh, I will know people in the crowds, and they know I’m running. At an after work event last night, my boss threatened to take pictures that might magically appear around the office. It’s a good thing this isn’t my planned outfit.

– And finally, I’m hoping its my first race under 2:36. I had hoped to PR back in July at RnR Chicago. It didn’t work out for that race, but the way Karen and I have been running, we can do it. Also, she’s run a PR below that, so we should definitely be able to do it!

Overall, my goals are simple:

Who else is racing?

Advice for running a race with a running partner?

12 thoughts on “RnR Philly: A Race with lots of Firsts”

Leave a Reply to Ja @Ja on the RUN Cancel reply