There’s less than 24 hours in 2013, and I’ve been ready for it to be over since September.

But let’s back up a bit and see why. I did my 2013 running recap, and while running was a huge part of my life, 2013 was probably the year of the most change in my life in 20 years. My parents split, got divorced, and my dad got remarried all in 1993. This year might have topped it.

January – I packed up my life and put it into storage, taking only slightly more than my little coupe would hold and drove from Hartford to Birmingham, AL. I took an opportunity at work that would mean being in AL for 6 months, and then be moved again (to a location unknown at the time). It meant leaving the best job I could have imagined, a boss that had become a good friend, and going from being about 2 hours away from my boyfriend to 25.

My final goodbye to Apt 611

February – Less than a month into my Birmingham experience, my boyfriend of 5 years and I broke up. I was in a new place, knew almost no one, and started to seriously second guess what I was doing with my life. I was miserable. I was depressed. And then came a sign: a Lake Austin Spa weekend was on sale on Rue La La, and they had one spot left for Valentine’s weekend. I sent myself on a fabulous weekend where cell phones are banned outside your cabin, meals are healthy, the spa is amazing, and it was the escape I needed. It was also what prompted me to start blogging. 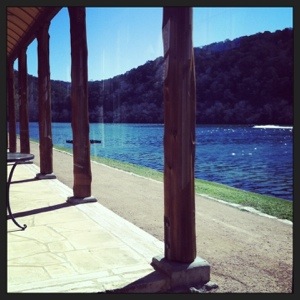 View from the dining room 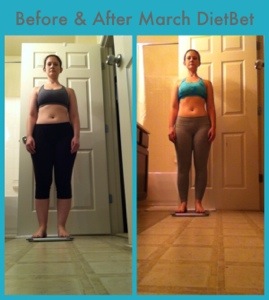 April – This was the month that lit my ass on fire. If I look back, this is when I realized I loved running. I looked forward to it. I felt angry and sad that terrorists chose a marathon as their target. And I was crushed when I felt like I was in the best shape of my life for a half that that didn’t go as planned. It spurred me to sign up for 3 more and focus on improving so I could get my PR.

Looking ready to take on a rainy half marathon

May – I got into my groove in Birmingham, didn’t run a ton, but was already getting excited about the next big thing in my year. 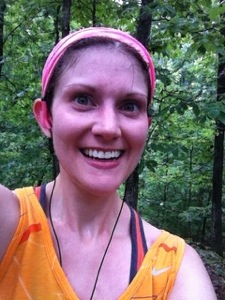 After my 10 mile trail run on Oak Mountain near Birmingham

June – June meant I was traveling. All. The. Time. I found out I was moving to Philly, and was literally flying every week getting started in my new job there. It was a tough month, but I explored Philly through my runs, and decided to do something big as I drove from Birmingham to Philly. I decided to run in every state I drove through, and raised $350 for the Leukemia & Lymphoma Society while doing it.

July – I was ready to PR Rock n Roll Chicago. I had trained hard. I was excited for the race and a mini-vacation to Chicago. I missed it by 2 minutes. The heat and sun got to me, and I had to slow down. But I did get to meet Chris Heuisler and Bobbi McCormick, who have both become a big part of my fitness and running life, so it was a win! I also met Karen and decided to switch from the Walt Disney World Half to Full. It seems like a lifetime ago!

August – I moved into my new apartment in Philly. Sadly, I still don’t feel completely moved in yet. I need to rectify that. 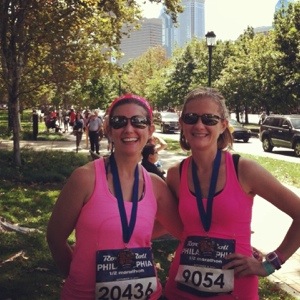 October – This was a big month! I went to my 10 year college reunion and had so much fun. It’s amazing how ten years can feel like summer break with good friends. I also turned 33. 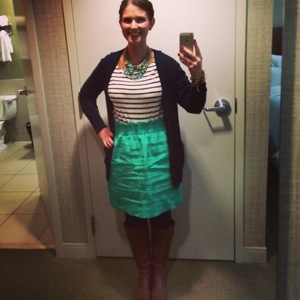 November – I became an honorary Cookie, and PR’d another half. I also survived my first totally solo Thanksgiving with a delicious meal, lots of workouts, and some rest time.

Only special people get cookie hats and awesome t-shirts!

December – I “graduated” from a 5 year leadership program at work complete with an official diploma, and kind words about my leadership, capabilities, and work ethic, along with a couple of funny stories about my time working closely with him from the head of our US business. I’ve reconnected with some friends in Philly, and continued to meet amazing Twitter/blog/real life friends, like Meri from Scoot a Doot.

We rocked the Ugly Sweater Run. And by rocked, I mean chatted while meandering through the 2.6 mile 5k (only about 1/2 mile short, but it wasn’t timed, so shame on us for even wearing the Garmin)

So that pretty much sums up my year. It had very high, highs, and very low, lows. I look forward to what 2014 has in store, but know it’s up to me to make it happen.